Another nutty conspiracy theory! That’s what I first supposed. I now believe that Columbus is guilty of a
huge fraud carried out over two decades. – Professor James T. McDonough Jr., St. Joseph’s University. 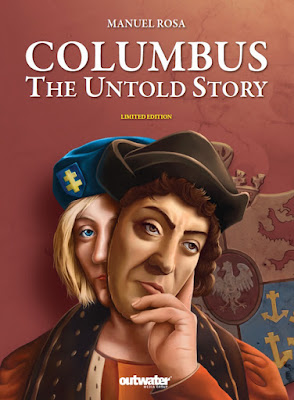 In the year 1444, near long-lost Constantinople, a Christian monarch breaks his truce with the Muslims, but Fate double crosses him. He is crushed in battle. All of his personal knights are slain around him, and he vanishes without a trace. Some years later, on Madeira Island, 2,500 miles to the west, a mysterious Knight of Saint Catherine of Mount Sinai marries into the Portuguese elite . . . and has a son.

Astonishing as it may seem, these two impossibly remote events were connected -- and the clouded genesis of Christopher Columbus can thereby be once and forever resolved. The key to unlocking the mystery was waiting in a place where nobody had ever looked before.
25 years of research has pieced together a stunning array of artifacts and data, from one end of Europe to another, from Asia, Africa and the Americas: a chapel ruin, a ceiling mural in a private palace, DNA test results, an impressive diversity of documents, keenly analyzed . . . and a sword, unearthed by a Bulgarian peasant, that found its way to a museum in Saint Petersburg.
The study and comparison of carefully censored State archives also helped explain Columbus’s life -- hitherto enshrouded in the deceitful machinations of power politics, false identities, and false discoveries in the Age of Exploration. Myth has at last been separated from fact, exposing what actually transpired.
Being extremely fond of writing memoirs, journals and letters, the man known as Columbus left a great deal of this overwhelming proof himself. Now, 523 years later, his writings assisted in his own undoing.
Many other clues -- meant to be deciphered generations later, when the need for secrecy had passed -- have been painstakingly gathered and analyzed. Some were cryptically displayed in the details of portraiture and esoteric writings, others in the most obvious features of one of the greatest works of Spanish Baroque drama, on heraldry, on a gravestone, via signatures and pseudonyms. What emerges is the picture of a consummate and cunning double-agent, with a bold and grandiose agenda.
Enter this 500-year-old labyrinth and discover the unimaginable: a medieval conspiracy so audacious, so massive, and so well executed that it fooled the world for half a millennium.

COLUMBUS-THE UNTOLD STORY is a magnum opus and by no means should be considered a work of pseudo history or just another source of nutty conspiracy theories. Rosa’s numerous reliable findings and solid theories would make Sherlock Holmes jealous. The History of Columbus has many mixed-up facts and personalities, and maybe the time has come for the discoverer’s life to be finally rewritten.   – Renowned Greek-Polish historian, Miltiades Varvounis

PLEASE CLICK "Comment/No Comments" below to add your comments and reviews.

Read the book? Share Your Thoughts on Columbus-The Untold Story

"COLUMBUS: The Untold Story" is a book resulting from 25 years of investigative research into European medieval documents, chronicles, artifacts and monuments. Acclaimed as a paradigm changer, after reading this book, the Columbus you knew will be History!
PLEASE DONATE at www.CristovaoColon.com